A Pyrex Kitchen is an American Kitchen

If you’ve spent any time in a kitchen, you’re probably familiar with Pyrex. From baking pans and storage containers to measuring cups and mixing bowls, Pyrex products are a staple in the American kitchen — and they have been for over a century. The iconic kitchenware made its debut in Corning, New York, in 1915 as the first-ever cooking products to feature temperature-resistant glass. Since then, the brand has become a household name and has stayed true to its American roots, ensuring all items are made in the U.S. 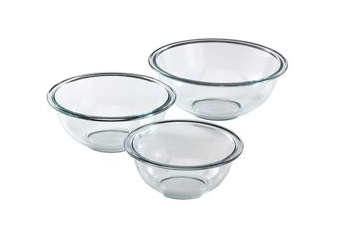 Pyrex bowls are a kitchen staple!

When Pyrex first launched, the glass dishes were unlike anything else on the market. The glass could withstand temperature changes without discoloring or cracking. Additionally, since the glass was see-through, bakers could watch their dishes cook. Pyrex revolutionized kitchenware and made baking more efficient.

American Made From the Beginning

Since its introduction in 1915, Pyrex has proudly been manufactured in America — first in New York, then in Charleroi, Pennsylvania, where it’s still produced and has been since the 1940s. World Kitchen, the Illinois-based kitchenware company that owns Pyrex, is proud to design and manufacture Pyrex right here in the U.S. and support American workers. At the Charleroi facility alone, World Kitchen employs over 700 people and enjoys supporting the local economy instead of sending jobs overseas. World Kitchen’s other facilities across the country employ about 2,500 workers.

When you buy Pyrex, you’re not only buying quality kitchenware, you’re buying a product that supports American craftsmanship and manufacturing. Explore the entire collection of Pyrex items to see how the brand has grown over the past 100 years.

Pride in Owning American Made Furniture